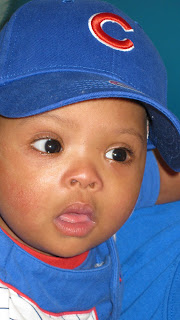 My sweet Malachi is 10 months old today! I can't believe it! He has been through so much in his short little life, more than anyone should ever have to go through. Here is a recap of his last 10 months.
*July 6, 2009. Malachi was born at a chicago hospital. His mom was unable to care for him due to a cocaine addiction and the state took custody 3 days after he was born. That was the last day he ever say his mom. He was the 9th child. His first month he struggled. Born at a small 3lbs 13 oz. he had a lot of growing to do. His mom had no (and I mean nothing, notta, zilch) prenatal care. She never once saw a doctor or took a vitamin. She lived on the streets and did drugs thus being said he was 2 month early and his lungs were not fully developed. July is when God began to work in our hearts and when our friendship with the Smiths ( not their real name, keeping their names private) began.

*Aug. Malachi was transferred to a different hospital. He was still in the Nicu and on an oxygen hood. The docters didn't think he was going to make it. Mom still hadn't been in to visit and had made no attempt to contact Malach's case worker. Malachi also began suffering from congestive heart failure. His outlook was dim. But out God is and was bigger than any illness and he had other plans for Malachi. Malachi was surrounded by Gods unfailing love and even though he had no visitors, no one to hold him or snuggle with him, No one to give his sweet kisses on his cheek and tell him that everything was going to be okay, God was their holding him when he was scared or alone. During this time Josh and I had started Foster Parenting classes. I had begum working with adults with disabilities, a job I had NO experience in. Little did we know God was working in our lives big time!

*September. Malachi is still in the hospital. The doctors still didnt think he was going to make it. They were working on him gaining weight. They were also trying to get him stable enough to be transferred to a childrens home. Malachi had been a fighter since day one and this month was no different. This is the month that Josh and I first heard about sweet little Malachi. Our friends, the smiths, had gotten an e-mail about Malachi. His case working has sent and e-mail out to all the down syndrome support groups in Illinois looking for a family who would be interested in fostering to adopt. The smiths were interested and they asked us what we knew about foster parenting. We began to pray for them.

*October. Malachi was getting more stable. The smiths were getting medical updates about Malachi and continuing to pray about their decision. Soon they realized that God did not want them to be Malachi's parents. That is when they approached us. God had been pointing them to us. WHAT? Josh and I were overwhelmed. Could we do this? Be parents to a child with special needs? we had so many questions. We prayed hard that night and the nights to follow. Its amazing the clarity God had given us in such a short time. We knew that we were being called to do something big! We knew we had to follow God. We began to pray daily and persue this sweet little boy. Soon he was released into the group home, and we got to go visit! We fell in love that october day!! God answered us that day and we knew he was ours.

*November. Malachi was gaining weight. Josh and I went to visit him every weekend as we waited to get our license finished. We couldn't wait for the day we would get to bring him home. Malachi was all set to come home when he was hospitalized with a UTI. Josh and I went to visit him in the hospital. It was the first time I felt the bond. He looked at me and I told him it was going to be alright. That was my first mom moment, one I will NEVER forget. November 21st. we had a big meeting with all of Malachi's care givers. This was the day we were supposed to being him home, unfortunately it didn't look like that was going to happen, he was still in the hospital. We went to the meetings and did our CPR training and headed up to the hospital to visit Peewee. We had pulled into the parking lot when Josh got a phone call. Malachi was going to be released!!!! He got released right from the hospital to us. It was the most amazing day of my life. I was a mom, Josh was a dad and we were finally bringing home our son. November 21st will always be the day we became a forever family.

*December was filled with excitement. Malachi was doing great and we were adjusting to life with a baby. He had lots of doctors visits this month. We got his heart surgery scheduled for Jan 30th. Malachi was enjoying meeting his aunts, uncles, cousins, grandmas, grandpas and every one else. He quickly became the start at church and everyone fell in love. How could you not?

*January was the big surgery. All moth we prepared. Cardio caths, cardio appointments, excessive hand washing and packing for our stay in Chicago. Jan 30th came all to quick. Malachi went into surgery and was done in 3 hours. He needed a complete AV canal and a mitrial cleft repair. The surgery was supposed to take 5 to 8 hours, again God was working in the operating room. They took him off the vent right away and we began our long recovery.

*February. Malachi was recovering great until they took his chest tube out. That day he went into JET. His heart rate was above 220 and his heart was in a junctional rhythm. There were 5 docs in his room working on him. They tried every drug imaginable to get his heart rate down. Nothing was working. They called up a pharmacist to help. She gave them another med that worked with adults they tried it and it worked! They also had to cardio vert him 4 times to get him back into a normal rhythm. It didnt work and he remained in JET for 4 days. We got to go home after about 9 days only to turn around and come back the next day. Malachi was in heart failure. Another 7 days in the hospital and we got to go home.ONly to turn around and go back, heart failure again. After total weeks in the hospital we were done for good. Malachi was finally back to his new normal. Praise God for answered prayers and for holding us through that time.

March. We had a great month. No big issues. Malachi started getting physically stronger. March was a boring month. Oh wait, he was hospitalized a week for the Rota Virus. Nasty, Nasty, I hope you NEVER have to experience it! He lost 3 lbs in 24 hours!

April. Another great month. Malachi started rolling over again. He was continuing to melt the coldest hearts! He was hospitalized for 8 days for RSV. That was the LONGEST week of my life! Malachi also started therapy!! Woo hoo, finally!

May. What will may hold? For starters it held our 1st buddy walk. We raised over $1200 for NDSS! and had a blast! Malachi is making great progress in OT and PT. They are amazed at how quickly he is progressing. Who knows what else is going to happen. We will just continue to Love our little man and pray that Josh and I are doing Gods will for our life! Malachi is such an amazing little man. I am sure he will do great things! We love you peewee!!

Isn't it amazing how you just hear about a child and it ends up being the one for you. He is a lucky little man.

Mommy to those Special Ks said...

I was just going to ask you if you had a suction machine until I saw your last post. Ha
I've had a hard time as Jax is getting over his cold but he still coughs his head off, I suck out his nose but don't get much. Sometimes I'll stick the suction in his mouth and make him cough and I can suck it out of his throat. The CPT should work, if its not, maybe its not junk but wheezes or crackles.

Ooh, he's gorgeous!! You guys are an extremely lucky family to all have each other. What a little doll! My daughter, Samantha, had rota virus a few months ago--I'm so with you on that being the most horrible thing. I really hope we never see that one again. Wound up in the hospital for dehydration. Ugh!

Anyway, I just found your blog, and will be back!