A few days ago I wrote about my frustration at the rut Malachi has been stuck in for 2 months now. He continues to take 3-10 steps on his own before falling to his bum. Ugh. I just want him to walk so he can explore while outside, climb on the playground and have some independence. Physically he is strong enough and has the coordination and balance needed to walk on his own. Malachi's issue is more of a mental thing. He lacks the confidence needed to just take off. So, after speaking with his PT we came up with a plan. We now have in out possession a posterior pediatric walker...aka a Nimbo. This thing the the cutest little thing I have ever seen.  Malachi tried it out for the first time yesterday and he cruised down the sidewalk with it. He will often let go and start walking on his own, which is great, but we will have this when he needs the assistance. We are hoping that after a few weeks with the Nimbo, the he will become confident and take off on his own. PT can not move forward until he is walking on his own, so we are trying all the tricks we can come up with, and yes some are unconventional. Here are a few pictures of Malachi with the Nimbo. 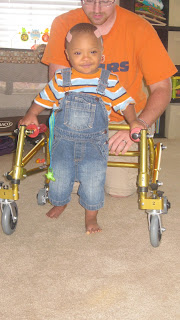 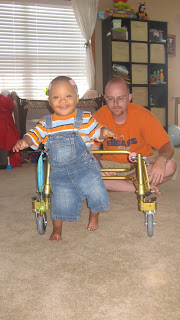 I dont need that stinking thing, I can do it on my own!
Posted by Blessed with Boys at 6:12 AM

Erin, Malachi is quite possibly the cutest little boy ever! I love that he is always so happy and smiley, and look at how big he looks with his new haircut! Can't wait to see you guys soon.