One year ago today Josh and I woke up full of anticipation. It was the day we had been waiting for, for months. It was the day we were supposed to bring our son home. Unfortunately Malachi was still in the hospital for a UTI. He wasn't eating well and the docs wanted to keep him longer to monitor him. Our dreams were shattered when we were told he probably wouldn't be released and therefore we probably wouldn't be able to bring him home. We held out hope and brought the diaper bag and put the car seat and stroller in the car just in case. Josh and I had to drive to Chicago to complete some training at the home Malachi was living in. The home was for children who were medically complex, it was sort of a holding place for the kids before they were placed in their new foster care homes. We did a lot of praying on the 2 hour drive downtown. We got their and attended a meeting with the staff of the home, they determined that Josh and I were ready to bring Malachi home as soon as he was released from the hospital. That day we also got trained on how to use his apneia monitor and CPR. We were finishing things up at the house and then we decided to go visit Malachi in the hospital. We had just pulled into the parking garage when we got the phone call. Malachi was getting discharged and we were going to be able to bring him home!!!! We had to go back to the house and finish up going over his paperwork then we could go to the hospital and they would release him directly to us!!!! I can't even describe to you how we felt at that moment. We got back to the hospital around 3. We got to hold Malachi and feed him while we waited for the discharge papers. Those didn't come until 7 that night. At 7:30 we walked out of those hospital doors with our son. He was finally coming home and we were beyond excited. When we got home around 9:30 we fed him, got him in his very own pj's and put him to bed. It was the first time in his life he was kissed before he fell asleep, it was his first time sleeping in an actual home it was the first time he had real parents. It was a glorious day. We didn't sleep that night, we just watched our son sleep. We prayed and gave thanks to God for trusting us to raise this boy, we were in awe of the gift we were just given. November 21, 2008 was the day we welcomed home our son. We will celebrate this day every year by having a family day. Today we are going to hang out, play with our son, enjoy soy ice cream sundaes with chocolate sauce and shower our son with love. God is good. 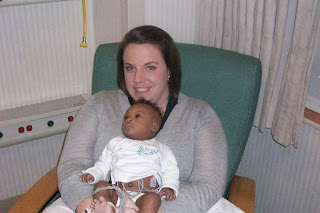 Malachi and I waiting to get discharged from the hospital. 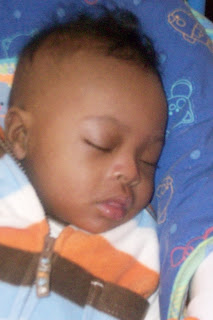 Malachi sleeping in his swing while we got things organized that first night.
Posted by Blessed with Boys at 6:21 AM

Nothing like a good cry first thing in the morning! I LOVE your stories. I would LOVE to adopt someday... don't know if I will ever be able to. What a sweet and precious boy God blessed you with! I hope you all have the most fabulous day ever! xoxo

Oh you make me feel the anticipation and joy we will have when we bring home our girl that is waiting for us somewhere!

"first time in his life he was kissed before he fell asleep" = TEARS!!!! Isn't adoption the BEST!!!!