Let me start off by saying I am by no means a speech expert. In fact, I am far from it. However, I do find it VERY helpful when parents share their ideas with me. Not every kid learns the say way so it's important we continue to try new things until we find a way that clicks.
Our number one concern with both boys is their speech (and the fact that Eli is nearly two and I am still carrying his chunky butt around...it's time to walk already dude!). We recently sought out a speech therapist outside of early intervention. I was tired of playing the game, being told we would start next month and that turning into 2 and 3 months of waiting. Before I knew it, Elijah was 20 months and had NEVER had a speech therapy session. He had been evaluated and told that we needed weekly ST, but there was no one available to see him. Thank you state of Illinois for being in such a financial tailspin that you can not pay the EI providers for weeks and months on end. Don't even get me started on that.
After being told Elijah would start speech as soon as the kids went back to school and then being told 3 weeks after school started that they didn't have anyone to see him, I flipped my lid. Word were exchanged and I decided no matter the price, Elijah NEEDED speech.
We were blessed to find an AMAZING therapist and in the 5 weeks Mrs. Ali has been seeing Elijah, we have seen major verbal advancement. Thank you Jesus!
Malachi is another story. From day one he has had feeding issues. He is my sensory kid and wanted nothing to do with chunks of any kind. He ate stage 1 baby food well into his 2nd year of life. In the last year or so we have been getting a larger variity into his diet, but it's still a struggle. He eats yogurt, applesauce, chicken, lunch meat, hot dogs and pretzel rods. That is it.  His verbal noises have been minimal and only says 3 words on a consistent basis, yeah, no and ok. In the past few weeks we have seen great progress with him imitating sounds and words but he still has a LONG way to go.
Here is what we have been working on. 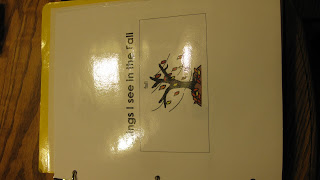 This is Malachi speech binder. He brings it to school daily where Mrs. T works on it with him. We work on it at home nightly too. It's a simple binder with laminated sentences in it. This one simply says "I see.." a black spider, an orange pumpkin, a while ghost and so on. Malachi matches the pictures by putting them in the sentence. We say it and we sign it. 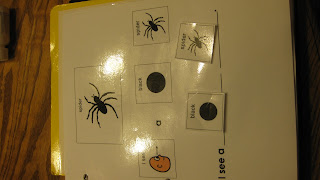 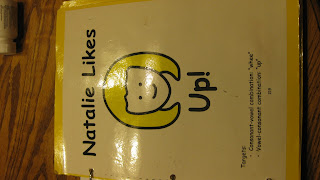 This Is a new story we got this week that focuses on the "up" and "Whee" sounds. It's a simple book that repeats up and whee over and over again. Each page has a removable image that Malachi can put on after he makes the required sound. It's supposed to be a reward but Malachi could care less so we often sing a quick song after each page. 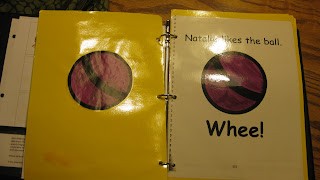 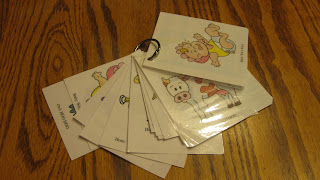 These are Elijah's sound cards. Each day we practice making the sounds on the cards. He has done very well with these. A few of the sounds are "hohoho", "woo woo" and "moo moo". We have a few copies of the cards and get creative with them. Mrs. Ali attached them to foam fish and put a magnet on the other side. She has a fishing pole that he uses to catch a fish and then he is required to make the noise that is on the fish. It's a fun way to mix things up. 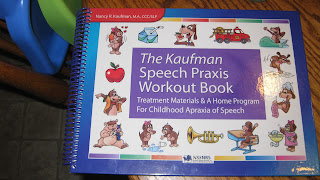 The sound cards come from this book which I can't speak more highly of. It's technically for children with Apraxia, which Elijah does not have, but we have found the same techniques taught in this book he responds well to. It goes into a lot of oral motor planning and had gestures that represent sounds. So far it's be a wonderful resource for us. Unfortunately the book is $300 and is on loan to us but is totally worth the investment!
What do you do at home to encourage speech? Do you have any good ideas that your children have been successful with? I would LOVE to hear!!
Posted by Blessed with Boys at 6:40 AM

Our son (ds) is 5. We practice speech at home with songs that are heavy in tones. Like Barbra Ann by The beach boys. All the baba's are awesome! Others we do are Munomina .. The Muppet Song. Grayson eventually learned the doodoo and the munomina parts. Anything that encourages mouth and toungue movement. It is a long road .. but the milestones are amazing!